ANTWERP, November 15, 2009 – A visit to Antwerp’s Diamond Museum is an education in history from the early exploitation of the gemstones in India to the vast globalised trade of today.

The museum, located beside the central railway station close to Antwerp’s diamond district, tells the story of some of the world’s most famous diamonds such as the Koh-I-Noor and the Cullinan diamond which eventually made their way to form part of the British Crown Jewels, now exhibited in the Tower of London.
The 3,106-carat Cullinan diamond, uncovered in South Africa in 1905, was the largest ever found and was later cut into a number of exquisite diamonds, including the 530-carat pear-shaped diamond which now sits atop the sceptre in the Crown Jewels.
The museum showcases the diamond story, telling the tale of the commercial mining of diamonds around Kimberley in South Africa in the 19th century, the founding of De Beers, the evolution of cutting and polishing techniques, the valuation of diamonds, and the emergence of Antwerp as the world’s leading diamond city.
After paying a 6-euro entry charge, visitors take a lift to the fourth floor and start their journey with an introduction to the history of diamonds from the earliest discoveries in India to the “Bling Bling” celebrity culture of today.
The museum’s recorded narrative explains where diamonds have been found, right up to the most recent commercial exploitation in remote areas of Canada and prospecting in northern Finland.
Annual production of diamonds has surged to 125 million carats, or about 23,000 kg., according to the museum.
About half of these diamonds can be cut into jewels, and the remainder are for industrial use.
It was after World War One that Antwerp finally asserted its dominance as the world’s number one trading and processing centre of diamonds, after rivals such as Venice, Amsterdam and Lisbon lost market share.
Antwerp’s expertise today is the cutting of large and difficult diamonds, rather than smaller stones, which are processed by the diamond industries of countries with lower labour costs, such as India.
Now Antwerp’s annual diamond trade accounts for $29 billion, or 8 percent of total Belgian trade, according to the museum.
Trust is an important component of the diamond trade in Antwerp. Deals are typically sealed with a handshake and a Hebrew slogan.

A short walk from the Antwerp Diamond Museum, across Koningin Astridplein, the large square beside the central railway station, stand a cluster of diamond jewellery shops, on the edge of Antwerp’s diamond district.
In the diamond district, diamond jewellers are interspersed with workshops of diamond cutters, shops that sell equipment for cutting and polishing diamonds, diamond banks, insurers; and the diamond bourse and Antwerp World Diamond Centre on the heavily protected Hoveniersstraat.
It is no coincidence that the diamond district is located so close to the central station.
International business people typically use the railway to travel into and out of Antwerp, and would feel uncomfortable walking far on public streets carrying valuable gemstones. 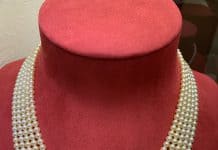 FEATURE – Bahraini merchants can take years, even decades to assemble the most exquisite natural pearl necklaces 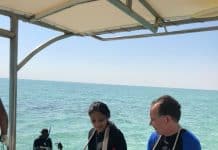