CAMBRIDGE, England, December 7, 2013 – Vanessa Burkitt, MD of Catherine Jones of Cambridge, has announced The Catherine Jones of Cambridge Golden Jubilee Design Competition at the Goldsmiths’ Centre in London.
The competition will honour the company’s 50th anniversary in business and will give trainees from The Goldsmiths’ Centre the opportunity to design a piece of jewellery in gold. The winning piece will be made and sold from the Cambridge shop.
Peter Taylor, Director of the Goldsmiths’ Centre, said this was a wonderful opportunity for the students. He thanked Ms Burkitt for giving them the opportunity to make a piece for such a special moment.
Ms Burkitt said, “It’s a very proud moment for us at Catherine Jones of Cambridge to be at the Goldsmiths’ Centre to launch our Golden Jubilee Competition. There are compelling reasons for us to be here.”
“The competition we are launching, is an arc back to our beginnings as a business, and the creative genius of Catherine herself. We want it to express her love and admiration for designers and the work they make and to her fair and honest approach to doing business. “
Catherine Jones opened the doors of her business in November 1963. She rapidly became famous in the industry for her simple and honest approach to business. She was the first person in the country to put her faith in the creativity of jewellery designers and buy their work. She could not conceive of ‘sale or return’.
“These people have done their work,” she said. “They have designed and made beautiful jewellery and bought the materials to make it. I should buy it. If I like their jewellery enough, I ought to be able to sell it. It is not right for these young people to be my banker.”
Catherine’s approach to buying was instructive; she would scan a selection of jewellery brought to her by an anxious designer and her gaze would focus on a piece. She would lean forward, take it in her hand and hold it to gain a sense of its substance. On some occasions she would say, “This is beautiful jewellery, but it needs more metal.”
Catherine would guarantee to buy the jewellery if the designer would use more metal. When they returned with their new, more substantial pieces, she would buy the lot. And sell it. She gave designers the confidence, the courage, to make jewellery that people would want to buy and wear.
Ivonna Poplanska, winner of the BJA Queen’s Jubilee Brooch competition with The Eternal Dove and former scholarship student at the Goldsmiths’ Centre, said, “This is a great competition because it means that the students will have the opportunity to think about making an inspiring piece of jewellery that is commercial. It will give them a wonderful addition to their CV, at this first stage in their career.”
Vanessa Burkitt said, “We hope that our competition will inspire the Goldsmiths ‘ Centre trainees to be bold and courageous in their designs and their ambitions. Though times have changed in 50 years, the industry cannot do without designers and their inspiration.” 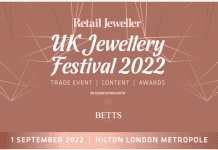 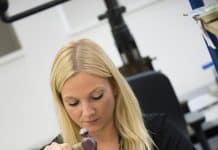 Birmingham Assay Office set to host its first careers event for apprentices, students, hobbyists and graduates of the jewellery trade

ABOUT US
Jewellery Outlook is a UK-based digital magazine and jewellery and gemstone news website reporting on trade fairs, suppliers, design, auctions and labs.
Contact us: davidbroug[email protected]
FOLLOW US
© Jewellery Outlook