Prospects for a pickup in industrial demand for platinum, which already faces a supply shortfall, could extend this year’s rally beyond today’s almost 6-1/2-year peak.

Platinum jumped today to $1,336.50 per ounce, its highest since September 2014, as investors bet on a successful vaccinations rollout driving forward a swift world economic recovery, which could potentially boost demand for platinum in industrial usages, notably in vehicle catalytic converters that limit emissions and in green technologies. The metal later eased back to $1,283.09 per ounce.

Some analysts said platinum could eventually rally further towards $1,400 per ounce but was unlikely to catch up with gold. Gold was down 1.18 percent to $1,798.21 per ounce today.

However, Commerzbank analysts, in a note, warned of risks of “speculative excess” in platinum.

Platinum’s popularity in engagement rings rose in recent years due to its price discount to gold, jewellers say.

However, the latest surge in platinum may force jewellers to consider hedging positions and could increase competition from gold which risks falling in price if a successful vaccines distribution erodes its appeal as a “safe haven” and if the global economy picks up fast.

READ
Next edition of Vicenzaoro postponed to September 10-14, 2021 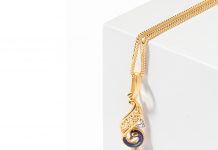 PICCHIOTTI celebrates fifth anniversary of Xpandable™ Collection with a limited-edition...