Maria Antonelle
SAO PAULO, Brazil, July 20, 2011 – Brazilian jewellery designer Maria Antonelle, whose latest creations are on show at the Casa Cor design museum, uses a variety of gems, pearls and rounded forms, and is inspired by the fluidity and transformation of Nature.
The designer, who is based in Marilia in Sao Paulo state, about six hours’ drive from Brazil’s commercial capital, uses precious materials in her designs, sometimes incorporating South Sea pearls; as well as gemstones, frequently from Brazil, and high-quality diamonds.
“My designs have various curves and forms that suggest movement. Nature is always shifting and undergoing transformation,” she told Jewellery Outlook.
Maria Antonelle, who is passionate about gemmology, is part of a Brazilian jewellery scene distinctive for its predominant use of coloured gemstones.
It is a vibrant community of up-and-coming designers experimenting with unusual forms and materials, many of which will be on show at the Feninjer fair, Brazil’s leading jewellery trade show, in Sao Paulo from 3-6 August, 2011.
The Casa Cor, located beside the Jockey Club race course, enjoying far-reaching views of Sao Paulo’s battalions of skyscrapers, showcases cutting-edge home interior designs and has a section showing the work of 16 jewellery designers, including Maria Antonelle.

Maria Antonelle
The jewellery design community in Sao Paulo is a dynamic group of mainly young people eager to show off their latest pieces at every opportunity in Brazil’s largest city, which is considered to be the engine of the country’s fast-growing economy. 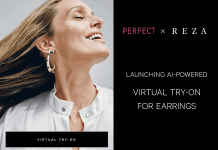