Cara is the second jewellery designer selected by PureJewels to create a special piece for the Platinum Heritage Collection 2011, following rising star Sarah Ho. They are among just six designers selected from numerous applicants.

PureJewels, based in the Green Street jewellery quarter in east London, is planning the second edition of the Platinum Heritage Collection this year, inspired by the story of the brand which traces its roots to India and Africa.

PureJewels will announce the names of the other designers who will craft the 2011 Platinum Heritage Collection in the next few weeks, and will launch the pieces at a special event to be held during London Jewellery Week, which will take place from 6-12 June 2011, to showcase the leading talents of the British jewellery industry.

Cara graduated from Central St Martins in 2008 with a first class honours degree in jewellery design. In 2006, she won a prize for innovative integration of Swarovski crystal in a Swarovski consultancy competition.

In the last three years, she has worked as a creative director for a designer jewellery brand and as a freelance designer on projects for an up-and-coming luxury brand. Now her focus is on producing her own collections, which has been very rewarding.

SYMBOLS
Cara is likely to draw upon her inspiration from symbolic imagery when she designs her Platinum Heritage piece.
Cara Tonkin said, “I have a fascination with cultural symbolism used in jewellery and art and its power to evoke emotion.
“Periods in history such as the Art Nouveau/Art Deco eras, are rich with symbolic imagery borrowed from many different cultures, and provide me with a great deal of my inspiration.”
She added, “Through my jewellery I would like to create similar emotion and a feeling of empowerment in the wearer.”
Cara said she treated stones as an integral element in her designs, and that she believes they should also provide a symbolic essence to a piece.
Jayant Raniga, Brand Manager of PureJewels, said he was delighted that Cara has joined the elite roster of designers working for the Platinum Heritage Collection in 2011.
“Cara is the undiscovered name we are looking for and her values and ideas are perfect for us,” he said.
“We just did not hesitate to accept her as the second designer. We are looking forward to collaborating with Cara.”
Cara said the Platinum Heritage project struck a chord with her as she had always looked to tradition and history for inspiration.
“It is important to recognise the past and how it has affected the shaping of our modern culture,” she said.
Cara looks forward to working in platinum, and believes the precious metal’s emotional resonance is in tune with the quality and imagination of the PureJewels brand.
“Platinum is such an exciting material to work with,” she said.
“I can’t wait to get started on the project and begin work with Jayant. I hope that through our collaboration we will create a piece which captures the vibrancy and elegance of the PureJewels brand.”
The Platinum Heritage Collection was brought to life by six jewellery designers in 2010 and reflected the heritage of the PureJewels brand.
Each beautifully crafted piece in platinum and diamonds reflected the cultural journey that the family-run business which became PureJewels had taken from India to England via Kenya. 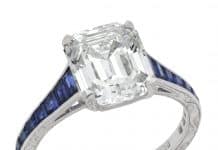