DUBAI, February 13, 2010 – Demand for gold jewellery has been subdued during the Dubai Shopping Festival due to the global economic crisis, the soaring and volatile gold price, uncertainty fostered by Dubai’s debt problems, and insufficient promotion, jewellers say. 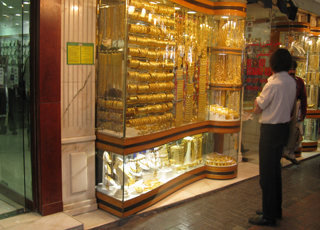 On a visit on a Sunday afternoon this month to the gold souk in downtown Dubai City and the gold souk of The Dubai Mall, the largest mall in Dubai, footfall was quiet.
Some of the corridors in the gold souk at The Dubai Mall were completely deserted.
Organised by Dubai’s Department of Economic Development, the one month long Dubai Shopping Festival, which is currently running from January 28 to February 28, is launched twice every year to promote the retail sector in the so-called city of gold by offering discounts and promotions.
But this year, Dubai’s Gold & Jewellery Group, an informal body representing more than 700 gold retailers, decided not to take part due to disappointing sales.
“There has been no promoting by the jewellery group, and we have seen fewer tourists,” said Joseph Ullas, manager at a Joyalukkas store in the Gold Center on the periphery of the gold souk downtown.
“However, we are still seeing good business from Indians, especially those seeking diamond jewellery,” he told Jewellery Outlook.
Middle- and upper-income Indians are increasingly buying diamond jewellery for weddings and parties, jewellers say.
RETAIL JEWELLERS’ PROMOTIONS 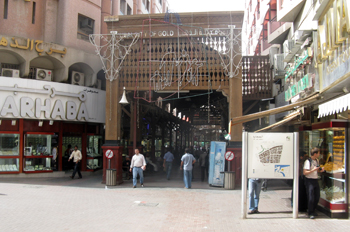 Joyalukkas and Damas, both of them leading Dubai-based retail jewellers, had their own diamond jewellery promotions to coincide with the Dubai Shopping Festival.
Joyalukkas offered a Samsung 32-inch LCD TV to those who spent 15,000 dirhams or more on diamond jewellery in its stores in Dubai. To those who spend 10,000 dirhams or more, Joyalukkas will give a Canon Powershot A480 digital camera. And those who spend 5,000 dirhams or more can receive a Continental Swiss watch.
Damas had a promotion for 18-carat gold and diamond “Spirit of Arabia” pendants, available for 790 and 890 dirhams.
Some jewellers expressed optimism that a recent drop in the gold price could stimulate demand for gold jewellery, but others said the high price of gold, and increasing volatility of the gold price, had dampened buyer interest.
The global economic crisis had led to uncertainty and increased caution, they said.
“It is not just the gold price, but also the global crisis – so many people have been affected by the crisis,” Joyalukkas’ Ullas said. 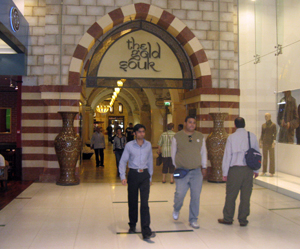 Varghese, a sales representative at Damas at the nearby gold souk, said, “People have money but they are worried about what will happen tomorrow.”
Anto John, showroom manager of another Joyalukkas store in the Gold Center, said Dubai’s property crash and debt problems had added to uncertainty in the emirate.
“There is a lack of confidence,” he said.
In the gold souk, Niraj Sagar of Maneklal Multi Jewellers said the high gold price had eroded demand for the mainly 22-carat gold jewellery in his store.
Pappan in Emirates jewellers said business was very slow.
“Our business depends on tourists, but there are far fewer tourists from Britain, Germany and elsewhere coming here now,” he said.
Aadin, a sales representative in an empty shop in the gold souk at The Dubai Mall, said, “We still haven’t seen a pick-up in business despite a fall in the gold price.”
Jayesh, a sales representative with GB Gems in the gold souk of The Dubai Mall, said, “It’s very quiet because of the crisis. There are few tourists.”
READ
GJEPC to host Indo-Russian jewellery summit in Mumbai