LONDON, September 2, 2012 – Footfall was brisk at the start of International Jewellery London (IJL), auguring for a strong flow of orders at the UK trade fair.
Stands selling pearls and gemstones saw buoyant early business as buyers re-stocked inventories for Christmas.
As well as the British trade, Indian, Hong Kong and South African suppliers featured prominently at IJL, which runs from September 2-5.

IJL is an important barometer for gauging the state of the UK jewellery industry.
The recession in the UK has forced jewellers to step up their game to reach out to consumers.
Jayant Raniga, brand manager of retailer PureJewels, based in the British-Asian retail jewellery hub in Green Street, east London, said he believed that innovative design was the key to success in these tough economic times.
“The industry will be increasingly design-led,” Raniga told Jewellery Outlook.
Raniga, as well as Chinese-UK designer Fei Liu, was due to speak at an IJL seminar on September 4 about how the rise of the emerging BRIC economies (Brazil, Russia, India and China) will affect the UK jewellery industry.

As well as the regular suppliers which showcased their latest collections at IJL, such as Domino and Brown & Newirth, first-time exhibitors included HK Jewellers which displayed 22-carat gold jewellery manufactured in Kolkata, targeting British Asian retailers, and new Japanese designer brand iKuria.
Solitaire Gemmological Laboratories reported strong enquiries at its stand after the Hatton Garden-based grading lab was profiled by Professional Jeweller magazine.
The Kickstart stand showcased talented designers such as Anna Loucah, whose pieces are based on inspiration from travel and symbols. She works with Fairtrade and recycled precious materials.

IJL featured seminars, including Brad Huisken, speaking about The Psychology of Sales, who explained how to maximise sales in-store.
“You need to focus your attention on the emotional reasons why people are buying,” he told an audience of retail sales staff.
“If you focus on this, the trust will come much easier.”

Callum Watt, managing director of maketh-the-man.com, spoke about doing business with industry bloggers to promote brands, and evaluating bloggers’ impact on the internet.

Diamond entrepreneur Martin Rapaport was scheduled to address a seminar on September 3, assessing the state of the diamond industry. 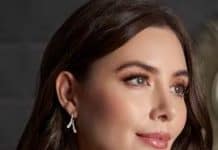