Gold prices rose for a fourth consecutive week to mid-August, hovering near $1,800 per ounce, with a focus on a slowdown in U.S. inflation increases.

After US consumer prices rose by an annualised 8.5 percent in July, below expectations of 8.7 percent and the previous month’s 9.1 percent increase, analysts questioned if the US Federal Reserve (central bank) might start slowing down the pace of rate rises, which could support gold.

Gold prices benefit in a climate of low interest rates because the yellow metal bears no yield.

However, while inflation increases are presently lower than anticipated mainly due to falling energy prices, analysts noted that as the winter draws closer, demand for energy will rise again, potentially stimulating more price rises and spurring the Fed to press on with aggressive interest rate hikes.

“Those price declines we’ve seen in energy might subside. It is very unlikely that the Fed will be comfortable tilting policy towards lower rates as many had expected in early 2023.”

US monetary officials have maintained a hawkish stance, suggesting that the war on inflation is still far from won.

Some analysts predicted that the US dollar, in which gold is denominated, could rise in the third week of August, supported by expected positive US retail sales and industrial output data, and that the strength of the US currency could weigh on bullion prices.

For UK-based gold investors, a softer pound made gold slightly less affordable in mid-August: the pound slid against a firming dollar on August 12 and lost ground on the euro as data showed Britain’s economy contracted.

UK gross domestic product fell by 0.6% in June, the biggest contraction since January 2021, but it was a smaller decline than widely feared.

The GDP fall was partly due to two bank holidays to celebrate Queen Elizabeth’s Platinum Jubilee.

The UK is struggling with a weak economy, inflation at a 40-year high linked to the war in Ukraine, and drought in several regions.

The Bank of England has said Britain could enter a recession at the end of 2022 and not come out of it until early 2024 as it raised rates to combat inflation, which it said was likely to surpass 13% in October.

The intensifying drought in swathes of England is expected to drag on the pound, which may make gold costlier for UK-based gold investors in the near term.

(Disclaimer: any opinions expressed in this article are solely those of the author, and should not be considered as investment advice.) 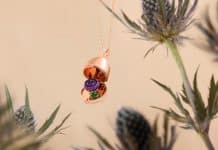