March 20, 2020 – Gold’s “safe-haven” appeal waned as investors scrambled for perhaps the safest haven of all — cash, but the yellow metal has been a better protector of wealth than many other asset classes in the coronavirus-fuelled global economic crisis.

Gold prices were up 2.15 percent to $1,503.87 an ounce on March 20 as bullion’s haven status re-emerged after a startling flight to cash in the face of tumbling financial markets.

Shares have slumped despite a raft of extraordinary measures by governments and policymakers to stimulate and safeguard the world economy amid fears that the coronavirus pandemic would trigger recession.

Gold’s recent dramatic fall in prices, after touching the highest level in more than seven years on March 9 in excess of $1,700 an ounce, has been less than other assets, including many shares, underscoring that its safe-haven appeal to investors is far from dead.

Gold prices tend to fare better in a climate of loosening monetary policy in the world’s biggest economy, because bullion bears no interest.

“True gold is falling along with everything else, but not by nearly as much in percentage terms so it is protecting one’s wealth better than virtually all other asset classes,” Lawrie Williams, precious metals analyst with bullion dealer Sharps Pixley, wrote in a column this week.

For UK-based jewellers and jewellery manufacturers, the slump in sterling against the dollar to the lowest level since 1985, will increase the cost of restocking the yellow metal.

UK-based gold savers will be protected to some extent from the recent declines in their bullion holdings in dollar terms by the recent sharp drop in the exchange rate of the pound against the dollar in which gold is denominated.

Gold hit its highest since December 2012 at $1,702.98 an ounce on March 9, before selling off on profit booking as stock markets plummeted.

The two emergency interest rate cuts by the Bank of England in March, coinciding with the rush by investors to acquire dollars, may augur for a continuing weak pound in the short term.

GOLD MARKET COMMENTARY – Gold prices hover near $1,800 an ounce, with focus on slowing US inflation 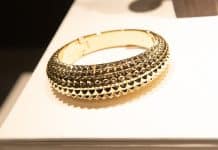