Graff Diamonds to exhibit at BASELWORLD

March 2014 – This year, for the first time in its history, Graff Diamonds will showcase its luxury watch and jewellery collections at BASELWORLD.

Located at Hall 1.1, Stand D51 within an impressive 503sq metre, single elevation space, Graff’s stand incorporates a stunning selection of luxurious and unique design features that can be seen throughout its network of over 40 stores globally.
Each element has been carefully curated by Graff’s Monaco-based interior design team; from the illuminated ‘Icon’ façade which features on the exterior of Graff’s stores across Asia, walnut wall panelling incorporated into its flagship store on London’s Bond Street and bronze feature showcases which draw inspiration from Graff’s store on Madison Avenue in New York.
One such feature which is sure to impress guests on arrival at the stand, is a cascading Bohemia crystal chandelier; a stunning, hand-blown glass sculpture
composed of hundreds of spheres of richly coloured glass in bronze, copper and gold tones – suspended from the 7-metre high ceiling.
A further impressive chandelier features in the gallery area of the space, complemented by a beautifully lit glass floor.
A specially created bar will be located in the salon area of the stand, crafted from walnut panelling and featuring a striking hand cut, floral inspired design inlaid in bronze.
A portrait by Vic Muniz of Laurence Graff from his personal art collection will also be prominently positioned. 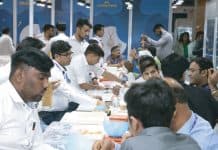