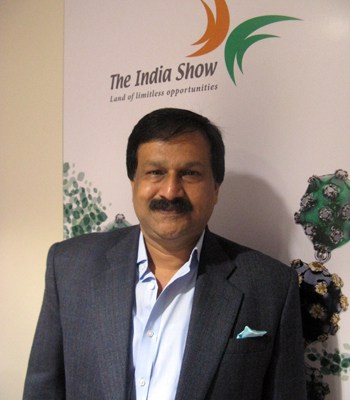 BASEL, Switzerland, March 27, 2011 – Indian gem and jewellery exports are likely to rise by more than 40 percent to around (U.S.) $36-37 billion this year, bolstered by buoyant precious metals and diamond prices and strong U.S. demand, said Rajiv Jain, Chairman of the Gem and Jewellery Export Promotion Council (GJEPC).
India has boosted its market share in the U.S. gem and jewellery market by around 25 percent over the past year, and is flourishing as a trading hub, Jain told Jewellery Outlook in an interview on the sidelines of BASELWORLD.
He said buyers were also re-stocking inventories from subdued levels after the global financial crisis.
“There is (strong) demand, and the figures will reflect price hikes in diamonds, gold and silver,” Jain said.
He said that Indian gem and jewel exports this year were projected to rise by some 15 percent in volume terms, after stripping out the effect of rising prices of precious raw materials.
He said Indian exhibitors attending BASELWORLD had been satisified with business done at the fair by the end of the third day of the show, which runs to March 31.
“They (exhibitors) are comfortable with the kind of customers they’re getting.”
He added, “I think people will do good business (at BASELWORLD).”
The India Palace in Hall 2 of BASELWORLD, and the India Evening attending by Commerce and Industry Minister Anand Sharma, had helped to boost footfall to the Indian exhibitors in the national pavilions in Hall 6.
“Everyone is in agreement that if you do this kind of branding (for India), it will help their businesses.”
The GJEPC is working to boost the image of India as a design centre, as well as a manufacturing hub, in the global market place, Jain said.
“Now we want to create a Brand India image – that India has capabilities in designing. It shouldn’t just be Made in India. It (jewellery) should be designed in India also.”
Jain said he expected an increase in overseas visitors to the India International Jewellery Show (IIJS), which will take place from August 4-8, 2011.