June, 2013 – Graff Diamonds has further expanded its Asian portfolio with the opening of its 11th store located in the opulent Jolie department store in Shenyang, North East China.
Based on a concept by interior architect Peter Marino, Graff Shenyang is a sumptuous, elegant space which provides a perfect environment for displaying jewellery. 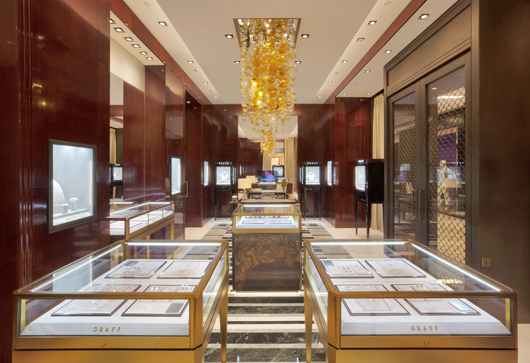 The exterior of Graff Shenyang boasts a highly artistic façade comprising an open grille, punctuated by the distinctive Graff Icon motif, which sits atop a textured bronze backdrop.
The façade has been crafted from dichroic glass which provides a striking visual effect that changes colour dependent upon the light and angle of viewing.
By nightfall the piece will be lit internally giving it another stunning visual dimension.
Graff Shenyang’s interior incorporates artistic touches inspired by Graff stores around the world, including luxuriously lacquered walnut panels in rich colours, complimented by stunning black and white striped marble floors.
Traditional stitched leather desks provide a wondrous location to peruse the striking design and fine craftsmanship of Graff’s diamonds and gemstones in finer detail.
The pièce de résistance is a large, highly decorative Bohemia crystal chandelier which gives the store an elegant yet contemporary feel. 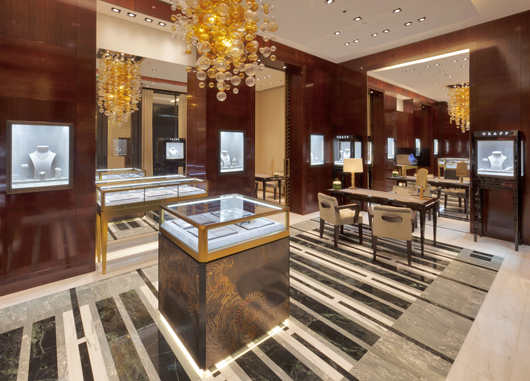 Laurence Graff made his first business trip to Asia in 1967, setting up a jewellery concession in Robinson’s Department Store in Singapore; from there he expanded into trade fairs and exhibitions around the world.
There are currently a total of 36 Graff stores globally located across the UK and Europe, North America, Africa, Asia and the Middle East.
2013 will also see the opening of Graff Diamonds’ first store in Seoul, South Korea.
READ
Emerald jewels to lead Bonhams Hong Kong sale in July