Sales results of the London fine jewellery auctions in June highlighted a growing appreciation for craftsmanship, which is also increasingly reflected in the wider retail market.

Pieces made with exceptional artisanal skills, combined with beauty and rarity, achieved outstanding prices at the Sotheby’s Fine Jewels sale on June 5 and the Christie’s Important Jewels auction on June 12.

High craftsmanship was a common denominator among items that flourished in the sales, such as a rare late 18th/early 19th century diamond tiara, which achieved a hammer price at Christie’s of 130,000 pounds, several times its pre-sale estimate of 25,000-35,000 pounds. The provenance of this piece, which had belonged to a “lady of title”, helped to boost its sales result.

“The older pieces can do extremely well, especially if they are fresh to the market, and there is a great appreciation for the craftsmanship,” said Keith Penton, head of Christie’s London jewellery department.

Among global design trends coming through in the jewellery retail sector, the premium of handcrafting skills is soaring, as they become increasingly scarce, with many young people turning to alternative, digitally driven professions in a fast-changing world. “Extreme craftsmanship” will be more revered amidst a growing appreciation of “personalised jewellery” as buyers celebrate exceptional artisanal pieces.

During a challenging period for the global jewellery market, the retail segments encompassing “bespoke”, or custom made, craftsmanship have never had it so good. Retailers offering bespoke services may have an on-site workshop, or atelier, where artisans re-model jewellery items in line with customers’ wishes, perhaps contemporizing an inherited piece, or “reinventing” an engagement ring after a divorce.

Craftsmanship will be increasingly valued by jewellery buyers, regardless of their age and income, as they take time off from their smart phones and hectic lifestyles to appreciate intricate workmanship.

At a trade fair in Geneva in May, the designer showcase was dominated by creations manifesting superb artisanal skills, such as London-based designers Ming Lampson and Alexandra Jefford. Connoisseur collectors and top-end buyers were constantly on the lookout for cutting-edge designs bolstered by remarkable handcrafting skills.

Signed pieces — that is those by upscale retail houses, such as Cartier and Van Cleef & Arpels — which revealed outstanding craftsmanship and beauty, outperformed in the London auctions. At the Sotheby’s sale, a 1920s diamond bracelet by Cartier, in classic Art Deco black and white, sold for a hammer price of 140,000 pounds, double its 50,000 to 70,000 pounds pre-sale estimate. Its articulated openwork panel was millegrain-set with circular-cut diamonds, to a black cord bracelet, and was further enhanced with single-cut diamond rondelles, signed Cartier, numbered, with French assay marks and partial maker’s marks. 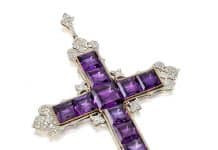