The GCC countries are the No. 1 market for Italian gold jewellery exports.
The Gulf countries account for more than 30 percent of the Indian gem and jewellery export market, according to the Gem & Jewellery Export Promotion Council (GJEPC.)
Trade visitor numbers were steady at the show, held in the Dubai World Trade Centre, running from April 23-26, 2015.

At least 30 buyers from Russia and Eastern Europe attended VOD, trade sources at the fair said.

Leading Italian brands, including Roberto Coin, with a distinctively designed stand conjuring up images of both Venice and the Middle East, and Broggian Milan, were part of a big Italian presence at VOD.
Celebrity Indian designer Farah Khan, who has sold bespoke jewellery to the Dubai royal family and is a well known figure in Bollywood circles in Mumbai, displayed some stunning pieces featuring large emeralds and other natural colour gemstones.

LeVian, well-known for their chocolate diamonds, held a popular catwalk event on the first day of the show.

The World Diamond Mark held their own catwalk event on April 24, which was also extremely popular with the visiting crowd.
One-off jewellery from the new Vicenza Jewellery Museum, was displayed in the Conrad Dubai hotel during the show, including a beautiful diamond and sapphire necklace from Stefan Hafner.The GIA gave a seminar about the latest diamond grading techniques that sparked a lively question-and-answer session about the challenges of undisclosed synthetic diamonds. 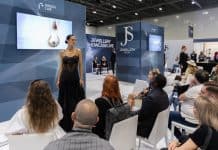 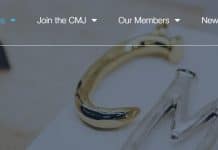