Jeweller Stephen Webster and Ornella Iannuzzi, Commended in the Fine Jewellery, IJL Special Award category
LONDON, March 13, 2011 – Alex Styles, who was a prominent designer at Garrard for 40 years, distinguished for his silver and ceremonial pieces, won the Lifetime Achievement Award Medal at the Goldsmiths’ Craftsmanship and Design Awards on March 7.
Styles joined Garrard as their principal designer in 1952. In 1953 he was responsible for a fine bowl with Lion and Unicorn handles to commemorate the Coronation.
Over the next few decades he was to design numerous pieces of Regalia, including maces and Mayoral badges that are still in use all over the world.
Styles remained in constant demand by Livery Companies, Universities and Public Corporations for his designs, and in 1987 a major retrospective of his works took place at Goldsmiths’ Hall in London.
Styles received his award from celebrity jeweller Stephen Webster who also handed out dozens of accolades to the up-and-coming design stars of the industry at the Goldsmiths’ Hall.
Asian designers featured prominently, with Jenna Tsang winning the Gold Award for Fine Jewellery, and for Platinum (Platinum Guild International Special Award); Jing Jing Cao winning the Gold Award for Fashion Jewellery-Production; and Yu-Ping Lin taking the Gold & Council Special Award for Gallery Jewellery (Holts Academy of Jewellery Award).
Stan Somerford won the IJL Special Award for Fine Jewellery for his Humming Bird & Flower Ring. As the Gold and IJL Award Winner, Stan will receive a cash prize and the opportunity to have his work showcased at the 2011 IJL event.
In this category, entrants were invited to submit items made in precious/hallmarkable materials that were primarily judged on design merit, but consideration was also given to quality of craftsmanship and finish.
Malcolm Appleby won the Gold & Council Special Award for Engravers (Senior), for an Engraved Steel Gun Breech.
Webster told Jewellery Outlook at a cocktail event after the awards ceremony that the boom in precious metals prices had led to a surge in interest in skilfully worked silver pieces, but that times were challenging for many self-employed silversmiths today. 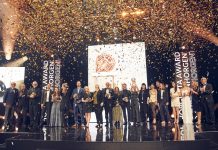