GENEVA, May 13, 2010 – Diamonds and signed vintage jewels achieved strong prices at Christie’s semi-annual sales in Geneva on May 12, with takings 65 percent more than last year’s May sales.

“The vigour seen in the US and Asia was equalled here in Europe, with strong prices achieved for fine jewellery, watches and wine. Demand for stellar examples rivalled that seen at the height of the market, which very much seems to have returned ‘en force’,” Francois Curiel, President of Christie’s Switzerland, said in a statement.
Christie’s jewellery sales totalled $33.9 million, above the high end of its pre-auction estimate.

Sotheby’s (ADD RIC) achieved 60 million Swiss francs ($54.10 million), almost double the low end of its pre-sale estimate, at its jewellery sales in the Swiss city on May 11.
Among the Cartier pieces was a 1928 “Tutti Frutti” bracelet from the Art Deco period, set with rubies, sapphires, diamonds, and emerald and onyx beads, which soared to 1.023 million Swiss francs, more than five times its pre-sale estimate.

Hancocks & Co, London-based traders, bought it, according to the statement.
A necklace set with 20 round diamonds, known as a riviere, went for 5.25 million Swiss francs to an Asian private collector, it said. The estimate was $1.8 million-$2.4 million for the piece encrusted with 155.17 carats worth of diamonds.

A diamond and enamel brooch designed by award-winning British jeweller Shaun Leane, who named it “White Light” after being inspired by a Dylan Thomas poem about the first snow of winter, went for 1.1 million Swiss francs to a New York jewellery dealer, Christie’s said.
Its 13 pear-shaped Steinmetz diamonds and smaller pave diamonds mounted in white gold weigh nearly 41 carats. 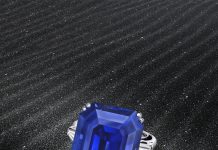