December 2014 – Vicenza Fair, the leading Italian jewellery trade fair organiser, and the Panama Diamond Exchange (PDE), have agreed to join forces in the organisation of events that will promote the trade in gemstones and jewellery in Latin America.

A Memorandum of Understanding (MOU) detailing the two organisations’ future cooperation was signed on Friday, December 5th, 2014, on the trading floor of PDE’s soon-to-be-inaugurated headquarters, by PDE Founding Chairman Eli Izhakoff and Vicenza Fair President Matteo Marzotto.
According to the MOU, PDE and Vicenza Fair will formulate a strategic plan and conduct a feasibility study for projects that include trade fairs, symposiums and industry forums, which will take place in Panama and promote the diamond, gemstone and jewellery business in a region that includes Mexico, Central America, South America and the islands of the Caribbean. The joint programme will begin in 2015.
The signing ceremony was the first official event to be held in the Phase I building of the Panama Diamond Exchange, which will open for business at the end of the month.

Mr. Marzotto was accompanied by Corrado Facco, Managing Director of Fiera di Vicenza, and leading representatives of the Italian jewellery sector, including Dr. Gaetano Cavalieri, President of CIBJO, the World Jewellery Confederation, and Roberto Coin, one of the world’s most prominent brandname jewellery designers and manufacturers.
Both Dr. Cavalieri and Mr. Coin are PDE directors.They were joined at the podium by Dr. Luciano Pataro, a PDE director from Panama and Erez Akerman, PDE President.
“The significance of this agreement, being signed in this new facility, cannot be understated,” said Mr. Izhakoff, during the ceremony. “The involvement in PDE’s mission of Vicenza Fair, which represents Italian luxury at its finest, emphasises that we are not just building offices, but rather an industry. Our goal, through the development of the Latin American gemstone and jewellery trade, is to grow the pie for everyone. As a key industry service provider, Vicenza Fair’s contribution can be invaluable.” 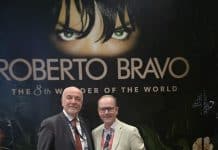