Best’s blue paraiba tourmaline rings, and a large red spinel ring, attracted strong interest from the public.
Jewellery orders at Goldsmiths’ Fair held up well despite the recession in the UK, organisers said.
“Early indications are promising, but we won’t know the full picture until after the show ends. The footfall is mainly UK, but we have plenty of international visitors too,” said Paul Dyson, longstanding director of promotion at the fair.

Some customers were seeking pieces with less weight in gold because of its soaring cost, and were turning to designer silver rings instead of gold jewels.
“I use vermeil in some of my work, because gold is too expensive to use in some of my pieces,” Iannuzzi said.
Vermeil typically combines sterling silver coated with gold.

Jewellers said they were more likely to use plating in pieces that suffer less wear-and-tear, such as pendants rather than rings.
Best works with pioneering gemstones such as paraiba tourmaline, spinel and tanzanite, as well as traditional precious sapphire, ruby and emerald.
Some rare gemstones, such as paraiba tourmaline — especially from Brazil — are becoming increasingly collectable, jewellers said.
One of the standout pieces at Goldsmiths’ Fair was a weighty 3.53 carat diamond ring by Marshall for 95,000 pounds.

Marshall, based in the Hatton Garden diamond hub in London, also displayed rings set with citrine, aquamarine and moonstone.
Large, hand-crafted colour gemstone pieces were on show at the booth of the Hatton Garden-based Henn, just back from exhibiting at the Hong Kong September gem and jewellery fair, the biggest jewellery trade fair in the world.
INNOVATIVE SILVERWARE
Silversmiths came out in force at Goldsmiths’ Fair, presenting a range of highly innovative designs with a serious purpose in mind.

Shona Marsh, for example, has created silver pieces in unusual shapes inspired by food.
Her ideas grow from simple designs based on clean lines and geometric patterns.
The silver objects are combined with wood, inlayed with complex silver detailing.
Another silversmith at the fair, Mary Ann Simmons, has spent years specialising in the art of box making.
She enjoys working to commission and has made pieces for Hollywood actor Kevin Bacon and the former King of Greece.
Goldsmiths’ Fair ends on October 7. 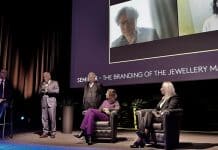