Solitaire Gemmological Laboratories (SGL) projects a sharp increase in the screening of loose diamonds due to the location of its new lab near Bharat Diamond Bourse in the BKC financial district, director Chirag Soni tells Jewellery Outlook Editor David Brough.

In parallel with India’s gems and jewellery trade, SGL has grown over the past decade and now has 10 certification labs in main centres across India, two in Saudi Arabia, one in Dubai with plans to open a second lab there in September, and a lab in London’s Hatton Garden diamond district.

SGL’s latest lab, located in the Capital Building in the BKC financial district of Mumbai, a few hundred metres from Bharat Diamond Bourse, will be a leading centre for screening of loose diamonds and diamond jewellery.

The company’s other Mumbai lab, in the Andheri district, will focus largely on jewellery due to the presence of a special economic export zone in Andheri.

SGL owns the freehold of its new lab in the BKC.

It says its proprietary screening technology, developed in partnership with a German company, gives it a strong competitive advantage in the lab certification market due to its ability to screen diamond jewellery as well as loose stones for the presence of non-disclosed lab-grown diamonds.

Speaking at the new lab on July 29, Chirag Soni, director of SGL, told Jewellery Outlook in an interview that in his experience detection of non-disclosed synthetics in natural melee was “frequent”, notably in smaller goods, even though screening technology has progressed.

“The trade wants to ensure that they are buying the right stuff,” Soni said. “Detection of non-disclosed lab-grown diamonds has improved daily, but the canvas is so huge that there is still a lot more to do.”

The issue of fraudulent non-disclosed synthetics is a major concern to leaders of the global diamond trade who say that lab-grown diamonds must be fully disclosed at all times so that the markets for natural and synthetic, or lab-grown, diamonds are clearly segmented and identified.

The location of SGL’s new lab near the Bharat Diamond Bourse, where trading in lab-grown diamonds is banned, is projected to facilitate the screening at the SGL lab in BKC of at least 5,600 parcels of melee over the next year, Soni said.

SGL’s lab in Andheri processed half of that volume of parcels over the past year.

SGL serves a number of top retail jewellery brands, in the UK, India and the Gulf Middle East.

A vast new convention centre, several floors high, is now being built by Reliance group in BKC and could become the next setting for the India International Jewellery Show (IIJS), India’s No. 1 jewellery trade event, in the coming years, Indian trade sources say.

If that were to happen, SGL’s lab in BKC would become even more centrally located in the heart of Mumbai’s diamond and diamond jewellery trade.

Coinciding with the launch of its new lab, SGL was a headline sponsor of the Retail Jeweller India 2017 Awards event, which gathered hundreds of industry leaders at the Grand Hyatt in Mumbai on July 29.SGL’s support of keynote industry events like the Awards, together with its continuing expansion as it adds labs in key markets around the world, underscores its rapidly rising profile in the gems and jewellery trade. 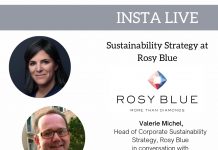 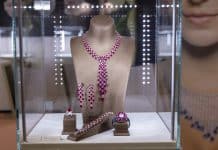