Anousca Hume, a CAD designer at Weston Beamor, was commended in the Design Section for her ‘CAD Design Skills’. Jeweller, Stuart Crandon, also of Weston Beamor, triumphed in the Craft Section ‘Polishers: Jewellery and Silversmithing’, while Rachel Whitehead, part of the New Product Development team at Domino, gained recognition in the ‘Pearl Design’ Section.

Anousca, who has worked for the company as a CAD Designer for the past eight years, entered a highly unusual hand ornament design, entitled ‘Diabolus Carpi’ (which loosely translates as ‘Devil’s Wrist Bones’).  This colourful and flexible piece was inspired by moveable serpents’ tails.

Stuart Crandon, who has been with the company for 21 years, submitted a piece designed by Becky Neil of Domino which won the International Jewellery London 60th Anniversary Diamond Design competition in 2015.

He was commended by the judges for the incredible finishing detail he achieved.
“It is a great honour to have the hard work, patience and effort that goes into making a piece like this recognised and it was a pleasure to meet with other skilled jewellers in the amazing Goldsmiths’ Hall,” Stuart said.
Rachel Whitehead’s inspiration for her Silver Award came from the bee.

Her ‘Honey Bee Necklace’ features a double string of graduating fully drilled pink Akoya pearls and golden South Sea Pearls enhanced by a ‘bee’, the body of which is made up using a large blue/grey, half-drilled Tahitian pearl complemented by a rich yellow gold and diamond abdomen and gold wings.

“We are extremely proud of all three winners and are delighted that their very different skills have been recognized,” said Glen Day, Head of Business Development at Weston Beamor.
“These are the normally the unsung heroes of the jewellery industry and it is great for them and for the company to have this acknowledgement of their undoubted talent.” 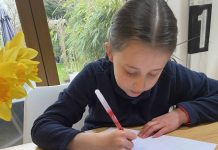