November 15, 2012 – Sotheby’s sold a flawless deep-blue diamond at auction in Geneva on November 14 for 10.27 million Swiss francs ($10.86 million), a world record for a blue diamond per carat and more than twice its pre-sale estimate.

Luxury jeweller Laurence Graff bought the drop-shaped stone which weighs 10.48 carats and is about the size of an almond, the auction house said. 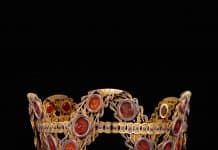