Thai gem, jewel exports set to rise around 5 percent in 2018

BANGKOK, February 25, 2017 – Thai gem and jewellery exports are forecast to rise around 5 percent year-on-year to USD$7.3 billion in 2018, powered by buoyant demand for Thai-manufactured colour gemstone and silver jewellery.

Exports are expected to benefit from a reduction in gem and jewellery import duties in Thailand.

The twice-a-year Bangkok fair, organised by Thailand’s Department of International Trade Promotion (DITP), is a showcase for colour gem and silver jewellery, with a vast array of loose colour gems from rubies to emeralds and sapphires and semi-precious stones.

Footfall was brisk at the Bangkok Gems & Jewelry Fair, which presented around 1,000 exhibitors. Retail buyers came from around the world, and exhibitors spoke of a strong presence of retailers from across Asia and Eastern Europe, and a steady flow of orders.

Jewellery
Chantira Jimreivat Vivatrat, Inspector-General of the Thai Commerce Ministry, told reporters in a briefing that gems and jewellery were a priority export sector for Thailand, and the sector employed almost a million people.

“We see growth in colour stones,” she added.

The Bangkok fair strongly promoted rubies, via its Ruby Heart of Love campaign, supported by the Jewelry Trade Center, a downtown Bangkok skyscraper housing many gem and jewellery retail outlets, and the World Ruby Forum.

The Jewelry Trade Center accommodates many gem and jewellery retail outlets, as well as stores selling fashion and home design items, and is a magnet for tourist shoppers from around the world. 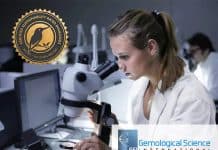