Jonathan Boyd
LONDON, October 3, 2010 – Leading UK designers showed off their latest creations at Goldsmiths’ Fair and noted brisk footfall despite a tough economic climate.
“It’s been very busy,” Shaun Leane, UK Jewellery Designer of the Year 2010, told Jewellery Outlook as he presided over his new Hawthorn, Blackthorn and Serpent collections in a prominent location on the first floor of the majestic Goldsmiths’ Hall near St. Paul’s Cathedral.
Speaking during the first week of the two-week-long Goldsmiths’ Fair, other designers, such as David Marshall and David Webdale, also reported strong interest in their pieces from the many visitors to the fair, which showcases some of the best UK-made jewellery.
They said they were not concerned over the impact of soaring precious metals prices on their businesses, noting that customers increasingly considered jewellery to be a store of value in uncertain times.
A highlight of David Marshall’s display was his Bombay Ring, incorporating a 3-carat “D,” “VVS2” white diamond, surrounded by three carats of small diamonds, for 111,750 pounds.
Bobby White, UK Young Jewellery Designer of the Year 2009, showed off an 18-carat rose gold ring which opens up to reveal white diamonds inside.
“It’s very popular with the bankers,” he said of the Motion ring, available for 2,690 pounds.

Rachel Galley at Goldsmiths’ Fair, London, September 2010
Jonathan Boyd, winner of Goldsmiths’ Best New Design Award, demonstrated his oxidised silver “exploding ink well” and a tubular pendant, inspired by people’s conversations, and featuring streams of letters of the alphabet.
“It’s about lettering and the meaning behind the lettering,” he said.

Carol Woolton, Editor of Vogue signing a copy of her book for jeweller Elizabeth Powell
Disa Allsopp presented an 18-carat gold necklace with a cluster of red garnets, available for 2,500 pounds.
One visitor said the close formation of red stones reminded her of pomegranates.

Shaun Leane at Goldsmiths’ Fair, London, September 2010
Tina Engell, displaying her pieces beside Allsopp, showcased jewellery featuring a wide range of coloured semi-precious stones and spoke of her increasing use of gold even though the price of the yellow metal had just jumped to an all-time high in excess of $1,300 an ounce.
“I am using more gold – it’s so beautiful. People see it as an investment,” Engell said. 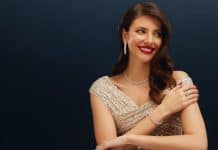 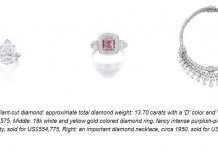 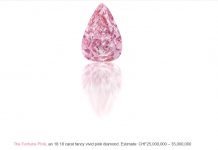