Rise in registrations for inhorgenta 2011 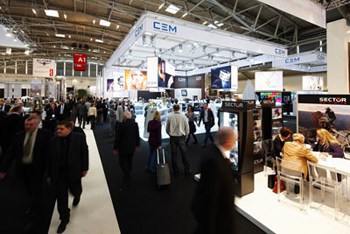 Photo: inhorgenta / Messe München GmbH
MUNICH, Germany, October 31, 2010 – inhorgenta 2011 has so far received reservations for a 5 percent increase in exhibit space over last year.
With 1,023 confirmed registrations from 28 countries the exhibitor numbers will again match the figures of previous years, the fair says.
With more than 30,000 visiting industry professionals, more than a third of them international buyers, inhorgenta is a leading international jewellery and watches trade fair.
“The trade fair’s unique global competence in jewellery and design, the location of our venue in the heart of Europe, as well as the improving economic situation in Germany are factors ensuring the success of the next inhorgenta,” said Klaus Dittrich, Chairman of the Management of Messe München, organiser of the event.
Many long-time and new partners of inhorgenta have already confirmed their participation, among them Schoeffel, Niessing, H.D. Krieger, Gellner, Meister, Henrich & Denzel, Stenzhorn, Thomas Sabo, Pandora, Swarovski, Monomania, Fossil, Casio, Festina, Guess, Police, Morellato, Dugena, Boley, Beco, and Dahlinger.
The number of newcomer exhibitors registered to date is encouraging: 75 companies will be first-time exhibitors at inhorgenta 2011.
inhorgenta 2011 will be held from February 25 to 28, 2011, at the New Munich Trade Fair Centre.