Snowy start for The Jewellery Show

BIRMINGHAM, England, February 5, 2012 – Despite the countrywide ‘Amber’ weather warnings issued by the Metrological Office and more than a sprinkling of snow at The National Exhibition Centre, Birmingham, it was business as usual at The Jewellery Show 2012 which opened today.
Many of the exhibitors I spoke with had experienced travel difficulties during the setting up period and in reaching the exhibition centre for opening time, but all were pleasantly surprised by how many visitors had braved the elements to attend.

“We’ve experienced a steady flow of customers and have been excited to talk to them about our new ‘Counter Sketch’ in-store design programme for retailers,” said Gary Baines, MD of GemVision, the Leeds-based provider of Matrix jewellery design software.
“This is now supported by a set of prototypes in base metals and czs and these have been very well received and are capturing buyers’ imagination.”
Barrie Dobson, Sales Director of IBB, was also pleased by footfall in the early hours of the show.
“We were horrified when we saw the weather last night but it would seem that a fair few people have braved it,” he said.
“The snow may have put off some of the less keen but what we want is quality not quantity and we seem to getting that, so it’s not all bad.”

One area in Hall 17 that was certainly drawing the crowds, was the Pandora Catwalk Cafe where all of this morning’s presentations attracted a good audience but especially the Catwalk Show at midday.
The show, which will be repeated twice daily on Monday, Tuesday and Wednesday and at noon on Thursday,  was broken down into six separate scenes:  ‘Pandora’, ‘Radical Neutrality’, ‘Time’, ‘Sponsored’, ‘Hyperculture’ and ‘Design Quarter’.
The jewellery on the catwalk was big and bold with colourful stones, or Swarovski crystals, much in evidence.
Swarovski is a new exhibitor at the event this year.
There were also plenty of two tone designs, mixing white and yellow metals.
Wristwear was ubiquitous with ‘look at me’ bangles, bracelets and cuffs jostling for prominence.

Nqobile Nkosi and Paul Spurgeon
Babette Wasserman went for a wooden bangle with added diamante sparkle; Kimberley Selwood for a deep cuff in pierced silver; Andonio Ben Chimo for an interlocking design utilising metals of all hues with clever and decorative magnetic clasps, and Rachel Galley for two enormous gold-plated silver bangles, which being the last pieces to appear were quite literally as a well as metaphorically show stoppers.
Another interesting story on the catwalk came from ‘Cornerstone’, the South African jewellery project established by the prize-winning British designer/maker Paul Spurgeon to provide a livelihood for jewellers working in the township of Soweto.
Paul has designed the jewellery in conjunction with his African partner Nqobile Nkosi who joined him at the Catwalk Show to see two models, one black and one white, wearing the jewellery they have created.
After the Show was over, an emotional Paul said: “It was better than I could ever have imagined.”
The Cornerstone Collection, which is to be sold in both the UK and Africa, is on display throughout the Fair on the Weston Beamor stand.

The Catwalk paid dividends for the Worcestershire designer/maker, Melanie Ankers of Kokkino who is exhibiting in the expanded ‘Design Quarter’.
Melanie’s ‘Shimmer’ collection in sterling silver dipped into 22.5ct yellow gold is right on trend, and drew admiring glances during its appearance on the catwalk.
It also brought a number of interested parties to her stand following the show.
“Today, as you might expect with the weather, has been quite quiet but we have had some good interest in our new collections,” Melanie said.
For the British Jewellers’ Association 2012 marks 125 years since its formation and it is celebrating with an anniversary logo, a new look stand and a competition to create a design for a Commemorative Silver Desk Accessory to join its silver collection.
Drawings of the pieces shortlisted for the competition, which is being sponsored by Cookson, are exhibited on the BJA stand and visitors and exhibitors at the show are being asked to vote for the one they prefer.
The items to choose from are: a Perpetual Calendar by Kerri Chamberlain, a paper knife inspired by the Staffordshire Hoard by Jack Rowe, a Unicorn Pen Stand by Erica Sharpe, a Desk Tray, Box and Paper Knife by Harriet Bedford, a Quill Pen, Ink Well and Stand by Petya Kapralova, and a Chrysler Desk Set by Alex Clamp.
“Please tell everyone to come along and cast their vote,” said an enthusiastic Lindsey Straughton who is co-ordinating the competition.
The Jewellery Show continues until 9th February with opening hours from 9.00-18.00 Monday to Wednesday and from 9.00.16.00 on Thursday. 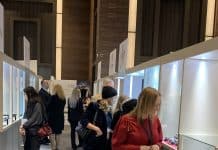