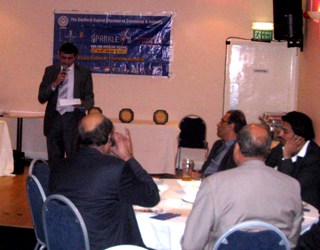 LONDON, December 12, 2010 – Senior officials from Gujarat hosted a dinner for jewellers in London on December 9 to promote Sparkle 2011, which will showcase Gujarat’s gem and jewellery industry next month in the Indian diamond capital of Surat.
Pravin Nanavati, Convener of Sparkle 2011, told the gathering that 80 percent of the world’s diamonds are cut and processed in Surat, which has one of the highest GDP growth rates in India.
H.D. Shrimali, Additional Industries Commissioner of the Government of Gujarat, said Surat had the competitive advantage of low-cost labour and highly developed skills in diamond cutting and processing, and good infrastructure.
“The government of Gujarat fully supports the gem and jewellery sector,” Shrimali said.
Lindsey Straughton of the British Jewellers’ Association (BJA) told Jewellery Outlook that she believed that talented UK jewellery designers could potentially work with Sightholders based in Gujarat.
Sparkle 2011 will take place at the SIECC – Surat International Exhibition & Convention Center from 6-9 January, 2011.