HONG KONG, September 21, 2011 – UBM announced plans to stage a jewellery and gem fair in Mumbai from 9-11 December 2011, saying the new show was in response to industry demand in India.
Indian gem and jewellery exports are growing in double digits year-on-year and India’s domestic market is thriving, Sanjeev Khaira, managing director of UBM India, told a news conference at the September Hong Kong jewellery and gem fair. 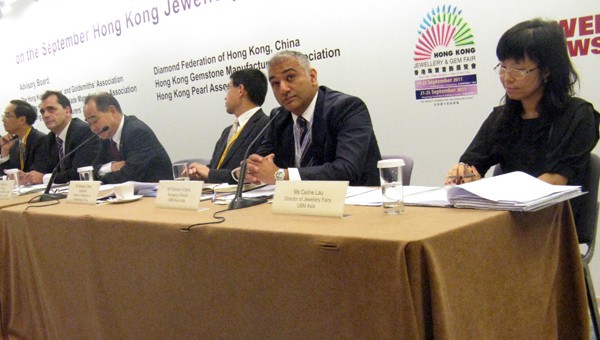 Sanjeev Khaira, Managing Director of UBM India, announced UBM’s plans to stage
Mumbai Jewellery and Gem Fair in December 2011
“UBM decided to come to the market in India at the request of participants in the industry,” Khaira later told Jewellery Outlook.
Being the peak tourist season, the month of December with its cool, dry climate is ideal and well timed to bring a fair to Mumbai, India’s richest city, Khaira said.
The Mumbai event to be staged at the Bombay Exhibition Centre will be UBM’s biggest international jewellery fair in India.
Spurred by strong economic growth, the retail market in India is becoming more mature, and industry rivalry is getting more intrense, UBM said.
“In a bid to move upmarket, jewellery enterprises are seeking ways to build up contacts and establish their brand image to help them stay competitive,” it added.
Khaira said: “The growth in the Indian jewellery sector is built on a highly skilled workforce and an insatiable domestic market due to the wedding and festival culture in India.”