July 2014 – Suffused with enchantment, Van Cleef & Arpels’ new collection of High Jewelry is inspired by a well-known fairy tale, Peau d’Âne. The creations bring a bejeweled story to life and evoke a rich array of emotions, from wonder through to love.

© Van Cleef & Arpels – Photo by Sonia Sieff – Dresses by Gaspard Yurkievich
Childhood at the castle
Once upon a time, in the quiet of an enchanted castle, there lived a princess. Her parents – the king and queen – loved each other deeply. Their daughter was the apple of their eye. Her charms were the talk of the court, with hair that shone like gold and eyes that sparkled with intelligence like diamonds. But as the child grew up, her carefree existence was shattered by the death of the queen. A strange madness gripped the king. Joy and splendor gave way to mourning and confusion. Uncertain what to do, the princess turned to the Lilac Fairy – her beloved godmother – for help. The fairy was concerned for the girl and advised her to run away from the castle.

On hearing this, the princess hid her most precious possessions away inside a chest: her mirror, her jewels and the dresses given to her by her father.
The first – of a heavenly blue dappled with clouds – bore the ethereal tint of the Color of the Sky. With its nocturnal hues, the second glowed with the Color of the Moon. The third dress, embroidered with light, blazed with the Color of the Sun. To disguise her regal appearance, the princess covered her head and wrapped her shoulders in a dark-colored animal hide, which soon earned her the name Peau d’Âne.Château enchanté clip
Silhouetted majestically against the surrounding countryside, fairytale castles transport us into an imaginary world of enchantment and splendor. To evoke the castle in Peau d’Âne, the Maison has created a clip whose architecture is illuminated by a harmonious combination of gems.

White gold, round, baguette-cut and half-moon cut diamonds, baguette-cut emeralds, oval-cut and briolette-cut pink and purple sapphires, round and baguette-cut sapphires,
one oval-cut emerald of 39.85 carats (origin: Brazil). © Van Cleef & Arpels
At its center lies a splendid Brazilian emerald weighing over 39 carats, in a spellbinding oval cut. A true Pierre de Caractère, it stands out for its unique blue-green color possessed with the spiritual quality that the Maison holds dear.

Punctuated by ethereal briolettes, a gradation of blue and purple sapphires emphasizes the twisting forms of diamond-set paths. This tableau of rare intricacy symbolizes the princess’s happy childhood, growing up with her father and mother at her side.
Fée des Lilas clip

Inspired by the Lilac Fairy, this clip expresses all the kindness and benevolence of Peau d’Âne’s godmother. Faithful to Van Cleef & Arpels’ tradition of fairy clips that dates from the 1940s, its outline is notable for the ethereal volume and delicate curves of the dress, which forms butterfly wings.

© Van Cleef & Arpels – Photo by Sonia Sieff – Dresses by Gaspard Yurkievich
Violet – the color of magic – blends with pink and white to compose an enchanting ensemble rich in plays of light. Varied setting techniques (grain for the dress, closed for the fairy’s headdress and claw for her wand) accentuate the overall impression of refinement and emphasize the gentle gradation of stones.
Amour, Amour ring
Rounded and three-dimensional, the Amour Amour ring is crowned with a Zambian emerald. The stone is notable both for its weight of 28.06 carats and for the unusual charm of its button-shaped cabochon (with a pierced center). Its even green color symbolizes the princess’s hopeful dreams of love.

White gold, round pear-shaped and troidia-cut diamonds, Paraíba-like tourmalines, purple spinels, one cabochon-cut emerald of 28.06 carats (origin: Zambia).
© Van Cleef & Arpels
The ring’s name is derived from a well-known scene in Jacques Demy’s film in which the princess plays the piano and sings in the castle courtyard. She is wearing a magnificent blue dress, here evoked by Paraíba-like tourmalines. Combined with purple spinels, they form a dazzling corolla that emphasizes the beauty of the emerald.
Robe Couleur du Temps clip

The Sky-colored Dress is among the wondrous presents given to Peau d’Âne by the king.

White gold, yellow gold, round, oval-cut and rose-cut diamonds, spessartite garnets, yellow tourmalines and sapphires. © Van Cleef & Arpels
Its ineffable shade, of “the most beautiful heavenly blue”*, is here rendered by a gradation of Paraíba-like tourmalines, pale green garnets and diamonds – all carefully selected by the Maison. Recalling the clouds that pass across the fabric in Jacques Demy’s film, diamond volutes here recreate the charm of a summer night while highlighting the volume of the dress.

© Van Cleef & Arpels – Photo by Sonia Sieff – Dresses by Gaspard Yurkievich
In an ultimate touch of refinement, the turquoise fan and sleeves have been carefully sculpted by the lapidary to reproduce the jewel’s design to perfection. 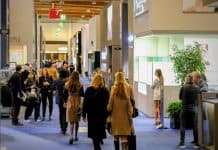