LONDON – From humble beginnings in east Africa, PureJewels is emerging as an important brand in the fast-growing east London jewellery quarter on Green Street, appealing to South Asian and Western tastes.

When Bhanji Gokaldas started off creating bespoke jewellery designs in Kenya in 1950, he could not possibly have imagined the journey leading to the establishment of a prominent retail jeweller in a dynamic district in London.
Still a family-run company, when Bhanji Gokaldas and Sons transformed into the newly branded PureJewels in June 2008, PureJewels had reinvented itself as a retailer with a highly visible presence on Green Street, as well as a growing force in mail order online retailing.
PureJewels targets mainly the 24-35 year-old engagement and wedding ring market – young, affluent people wanting to buy a beautiful piece of jewellery — and now sells half of its jewellery to British Asians and the remainder to other Britons, says brand manager Jayant Raniga.
“We’ve become a destination brand for engagement ring shopping,” Raniga says.
“Positioning PureJewels as a high-end brand, the engagement and wedding ring market gives us the opportunity to establish a new relationship with a client.”
Jayant’s grandfather Bhanji, his father and his two uncles left Kenya for England in 1974 and have since built up a dynamic presence on Green Street, which is now branding itself as the centre for South Asian jewellery style in London.

PureJewels provides high-quality gold, platinum and diamond jewellery for gifts and weddings.
Just a few doors away stands Bees, another retail jeweller owned by the family, which sells South Asian costume jewellery at a helter-skelter pace.
PureJewels offers bridal collections to suit a variety of tastes:
PASSION – Passionately lavish with diamonds and spectacular sapphires.
HONESTY – These daring, contemporary classics are inspired by the theme of honesty, a hallmark of a happy marriage.
GRACE – Simple, sophisticated rings to complement one’s natural elegance.
VIRTUE – This feminine collection is finely textured and beautifully finished – for a lifetime of virtuous pleasure.
HONOUR – These strikingly simple designs depend on clean lines and intriguing detail to create a bold look.
ADORATION – These spectacular rings are worthy mementoes of one’s extravagant celebrations.
Underscoring PureJewels’ commitment to the bridal market, the jeweller will be the official headline sponsor at the Asian Wedding Exhibition in 2010.

PureJewels stocks Rado watches, which are highly popular with its core clientele.
“Rado has a long heritage with the Asian population,” Raniga says.
PureJewels’ future collections are expected to feature more coloured gemstones, such as emeralds, rubies and topaz.
Victorian style jewellery has also become more visible in PureJewels’ collections.
“We see the Victorian look as more of a fashion statement,” Raniga says. “We have Victorian style jewellery in long chains.”
PureJewels, which also accepts commissions for bespoke jewellery, has won a number of awards for its marketing ingenuity and was highly commended in the Retailer category at the Thames Gateway Business Awards 2009. PureJewels was also commended in the Business category.
LOOKING TO THE FUTURE
PureJewels has pledged strong support for the Green Street Jewellers’ Association (GSJA), which played a big part in a series of events at London Jewellery Week in June 2010.
PureJewels carried a sponsored brand feature in the new “Discover Jewellery” print magazine, which was launched at London Jewellery Week to raise the profile of Green Street jewellers.

“It’s a fundamental shift of our core brand and shows our level of commitment to creating design-led jewellery,” Raniga said.
PureJewels plans to launch a catalogue, and will enter Platinum Heritage Collection pieces to the Lonmin Design Innovation Awards.
PureJewels’ role as a Prestige Partner highlights its commitment to the success of London Jewellery Week.
“The fact that we wanted to be established as a jewellery quarter on Green Street is a prime reason why we wanted to be on board with London Jewellery Week as a Prestige Partner,” Raniga said.
As a Prestige Partner, PureJewels had a prominent listing on the London Jewellery Week (LJW) website with images and logo, and featured in official LJW marketing.
BRANDING OF GREEN STREET
PureJewels is at the centre of a campaign to build up the Green Street brand in the run-up to the 2012 London Olympics, a prime opportunity to capture footfall of foreign tourists visiting east London for the Games.
Raniga says he hopes that Green Street will become a brand as well known for South Asian style, as Hatton Garden is known for diamond jewellery and Bond Street for magnificent fine jewellery.
Visitors from the USA, the Far East and Europe already make a point of shopping on Green Street for new or custom jewels, and the area has been a top shopping destination for Asian brides. 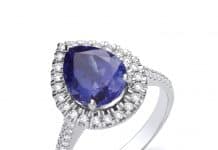 Vicenzaoro, uniting the gold and jewellery sector, returns in the Spring

Vicenzaoro, uniting the gold and jewellery sector, returns in the Spring