BIRMINGHAM, England, November 2016 – WB The Creative Jewellery Group was one of a select group of companies to be honoured in the Midland’s heat of the prestigious 2016 ‘EEF Future Manufacturing Awards’. 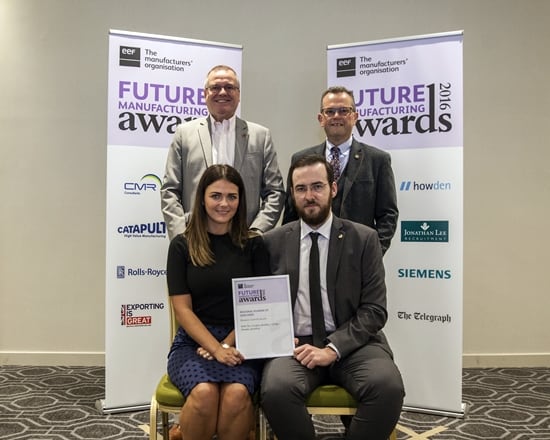 The company was ‘Runner Up’ in the Business Growth Category of the Awards which are staged by the Engineering Employers’ Federation. Their win was announced during a luncheon hosted by BBC presenter, Wendy Gibson at Staverton Park in Daventry earlier this month.

The company’s entry was centred on its ‘Wedding Ring Cell’ which produces entirely British-made wedding bands for Domino’s ‘Created & Crafted in Britain’ range.

It showed how the company’s investment in new technologies and its commitment to staff training has resulted in a sevenfold increase in production with an associated drop in production costs across its comprehensive and growing range of wedding rings.

Importantly, as well as resulting in considerable growth in sales, this project has also cut the company’s delivery times from 4-6 weeks to 24-48 hours on stock lines and made to order within 10 days.”

“We are very proud of what we have achieved.  The Cell has introduced a strongly engineered product into a traditional craft environment – providing increased accuracy, less room for human error, greater speed of production and a more consistent product.  To have our efforts acknowledged in this way is the icing on the cake.  This competition attracts some really big names and other winners this year were Jaguar Land Rover, Weetabix and UniPart so we are in extremely good company,” says Mark Thomas, Operations Director at WB The Creative Jewellery Group who masterminded the project.